Graphics embedded in HTML require a description of the graphic in the form of an alternative text inside the alt-attribute of the <img>-tag.

This attribute can be used to provide an initial set text for the graphic. This is important if a graphic cannot be displayed or perceived by the user, for example when using a screen reader. The alternative text is not used to add additional information to the graphic, but to reflect its content depending on the context.

But how should such an alternative text look like?

It is important that

In certain situations the specification of an image type is advantageous. e. g. alt="logo: ..." oralt="book cover: ...". This conveys the kind of graphic. If the content of a graphic is already described in the context of the same, is it acceptable to refer to this in the alternative text.

Since it is not possible to establish a formulation rule for every single conceivable graphic, the following guideline focuses on examples of alternative texts. They are distinguished into Functional, Identifying, Descriptive and Empty. The choice of examples is based on the study Alternative text of images .

If the button for a search is represented exclusively by a magnifying glass, the alternative text must be "Search":

However, if a text is added to the icon, the alternative text must be null:

Sometimes icons are placed in front of a link. If the link text itself has no corresponding text, alternative texts for the following icons are required:

Not every prefixed icon needs an alternative text. The most important reason for considering an alternate text for a prefixed icon is the announcement of a context change - i.e. a new application, a new window, a new tab.

Furthermore, there are situations in which an icon appears several times on a page, but has different meanings - for example, an icon for further or supporting information at different form fields. This can be seen in following excerpt of an event form:

If the logo of TU Chemnitz is linked,

following the alternative texts is acceptable:

If a graphic contains writing and is linked, but there are no references to the text in the context, the image type and the essential texts should be in the alternative text:

There is usually more information on an event poster than on a book cover. If this information cannot be retrieved from the context of the graphic, the following alternative texts can be used for the linked image of text.

Alternative texts for banners should include the product or event in question, in this case, "Chemnitz Linux-Days 2016". In addition, a short description of the motive and/or the indication of the advertising slogan can be added: "Robot tinkering Tux" respectively: "Motto: It's your project". If there are no comparable link texts on the page, the name of the provider may also be a sufficient alternative text.

Many graphics have little meaning in terms of content or are already explained in the body text, such as illustrative photos of people or a curve diagram. If a graphic merely illustrates the surrounding text, a concise identifying alternative text is sufficient, e. g. alt="Coach hugs several players" or alt="Curve diagram as described in the previous paragraph". In the alternative text the content of the graphic is given, but a more detailed description of the graphic is obtained by reading the context or through a long description.

If a graphic does not contribute to the understanding of the rest of the content, but still has special details that are not described in the text, a short alternative text indicating the detail should be applied. In the following example, it is assumed that the graphic is shown on a web page about a report of the Chemnitz city festival:

Certain graphics cannot be described succinctly. This applies e. g. for information graphs such as diagrams:

Images of artwork do not need to be described according to WCAG 2.0, as they primarily serve the sensory experience. Identifying alternative texts are therefore to be used, e. g. "Mural by Klaus Neubauer in the staircase of the TU Chemnitz, 1969"s:

There are numerous graphics that display text. In most cases, the visible text must be included in the alternative text. Sometimes special features must be considered:

For example, the following texts can be applied for the not linked TU Chemnitz logo:

For some logos a long description is useful. As an example, we take the logo of the Faculty of Computer Science:

A book or album cover primarily provides text. However, the design can also play a fair role:

If the textual information is provided within the context, the following alternative texts can be used appropriately:

When observing election posters, the design plays a decent role, but the core message is all about the people, parties and slogans.

Event posters usually contain even more specific dates. Important information, such as date and location, should always be provided within the context and not just on the graphic.

Describing photographs is significantly more difficult than describing written graphics. Photos can convey information, but they can also trigger emotions. For example, a photo of the controversial pilot whale fishery on the Faroe Islands: Below are shown different possibilities on how to handle such photos.

Similarly, the use of images to achieve a specific effect, for example, pictures of happy graduates on the university website convey a positive feeling:

For photos of people, the first thing that matters is the name. 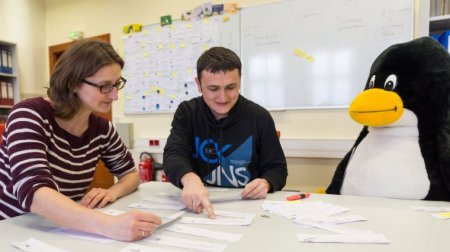 These requirements also apply to the creation of alternative texts for photos of known persons.

In this case, the browser does not transmit any information to the Accessibility-Tree of the operating system, a screen reader will be able to ignore the graphic entirely.

Empty alternative texts come into question for decorative, invisible graphics that are redundant to the text.

Decorative graphics do not show any independent information. The header images on the web pages of the TU Chemnitz are suitable representatives of such graphics:

Graphics redundant to the text

This includes graphics that are unnecessary for the text. For example: continuous texts with links to internal pages, marked by icons. The link is already identified by a screen reader and the icon does not provide any significant additional information. Only when an icon signals a change in context should this case be included in the alternative text, also see Section "Functional Alternative Texts". Other examples of redundant graphics are icons that visualize a text.

Graphics with an empty alternative text can be included for screen readers just as well as via CSS. To ensure these graphics are still detectable when using contrast mode, the background CSS-feature is to be waived. Instead the pseudo-element :before or :after in connection with the property content are to be used.

There are many variants for the implementation of teasers. Typically, they consist of a linked headline, a graphic, a brief description and possibly another link ("more" or similar). A clear recommendation for the alternative text type cannot be given.

On the website of the TU Chemnitz there is the section "University news", which provides access to current news of the university via teaser images and texts. There the image and headline are linked, the alt text is null.

Finally, some problematic issues and implementation techniques are demonstrated.

For alternative texts, there are some aspects that can be considered in the editorial work:

With HTML5, graphics can be semantically grouped with a caption:

A screen reader should output the following:

This pure HTML5 technique is certainly the best way to structurally merge an image and caption. So far, however, it is still little supported by browsers and screen readers. Therefore, the caption must currently be linked to the image using a different technique:

The following should be noted:

The alternative text (a space) prevents the graphic from being evaluated as decorative and allows information about the graphic to be transferred from the browser to the accessibility tree. The attribute aria-labelledby replaces the alternative text with the linked text - in this case the caption. The attribute aria-hidden removes the caption from the screen reader's reading flow to avoid redundancy.

Accessibility support for HTML5 and ARIA techniques in browsers and screen readers is currently subject to constant change. In long-term projects, pure HTML5 technology is likely to be used, but for current projects you should always use aria-labelledby.

If an additional description is required in addition to the alternative text, several technical options are available. Basically, descriptions in the immediate context are to be preferred:

1st International Conference about Digital Feedback Takes Place from June 29-30, 2023 at #Chemnitz­University­Of­Technology. Contributions can be submitted until…

How Monuments of Industrial Culture Can Contribute to a Positive Energy Balance: @umweltstiftung supports #Chemnitz­University­Of­Technology in the development of a…

President of #Chemnitz­University­Of­Technology Re-elected: Prof. Dr. Gerd Strohmeier was confirmed in office on January 24, 2023, by the Extended Senate of the…
Connect with Us:
Vorschaltseite